A Sad Day for the Tree Stewards who've been advocating for the grove of 70 year old trees at Ingraham High. 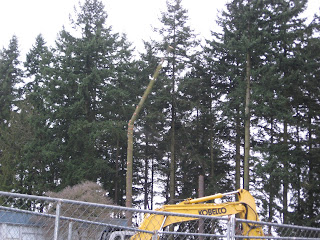 At least 27 native trees that have stood watch over generations of students at Ingraham HS are being felled today. Save the Trees - Seattle has stood up for this significant grove of trees for a number of years since the Seattle School District planned to remove them as a part of their High School addition project. The group won several rounds in superior court but the final round went to the Seattle School District cutters.


The Ingraham Grove had stood for 70 years providing shade, habitat and fresh air for the neighborhood.

The neighbors and Save the Trees - Seattle group had garnered enormous support from many elected officials and community groups. A letter of support had been sent to the School Board in 2008 signed by 8 members of the Seattle City Council and other leaders. Save the Trees - Seattle celebrated many victories in this fight and showed the leadership in the City that there was a good basis for protecting "groves of trees".  In 2009 the City Council passed and Interim Tree Ordinance with a "Groves of Trees" element.
Many of the trees will be preserved along Ashworth Ave N. But a significant impact will be felt by the loss of at least 27 large trees. It is tragically clear that Seattle School District has a lot to learn about trees and our environment. It's a very sad lesson for Seattle public school students.
A School District spokesperson, Tom Redman stated that the trees cut would now become the property of the tree contractors, who would presumably take the logs to be milled. But he really did not know what would become of the logs.

The trees are "screaming" as we speak this morning. And at least the press and neighborhood are listening.  Check KOMO 4 TV News, Fox Q13 News, and KIRO 7TV News, and Seattle PI for more coverage today. Seattle PI covered an earlier chapter in the story by Lisa Stifler in '08. http://www.seattlepi.com/local/356974_ingraham29.html
Steve Zemke of Save the Trees - Seattle and Save Our Urban Forest Infrastructure (SOUFI) and blogs at  Majority Rules and has issued a statement there in an article entitled -

Tonight just before dark I went over to check things out once again and asked a worker in a hardhat when they were going to cut the trees down.  His response was that "tomorrow the trees would be screaming". It's strange but I could not think of a more apt response for the trees.