Fascinating story from Everett Herald by Gale Fiege yesterday on how the Tulalip Tribe has created intentional habitat areas, that begin as meadows at Camano Head.  Deer, elk, and many other mammals and species have flocked to these areas. This technique follows age old tribal customs.

Could other communities try this method on smaller scale? This type of accidental habitat creation happens when development projects are abandoned or changed. Other uses, such as community gardens, or educational uses can benefit. Of course we're not suggesting that elk will migrate to the urban areas, but on a small scale this concept CAN bring wildlife diversity to our communities.
Why not make the best of these opportunities? 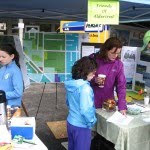 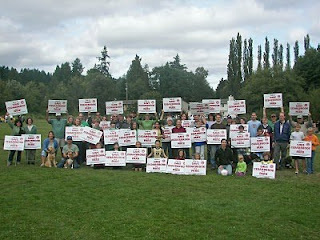 photo credit/save cedarbrook
and Cedarbrook
park proposals and what possibilities are available to protect these areas for public use. Habitat and Open Space is one very good potential usage for these large "surplussed" school sites.
Published: Sunday, June 6, 2010

Hunting ground comes back to life
http://www.heraldnet.com/article/20100606/NEWS01/706069861/-1/RSS02
By Gale Fiege
Herald Writer
TULALIP — High on this bluff, Tulalip Tribes member Gary Baker enjoys the view across the lush meadow, over the water and out to Camano Head.

Photo Credit -
Dan Bates / The Herald  (click to enlarge)Mike Sevigny walks through the dense meadow on the Tulalip Indian Reservation on May 11. Sevigny was surprised by the amount of reseeding that took place naturally since the meadow was first planted.


Generations ago, Coast Salish people set small wildfires to create meadows like this for hunting and gathering.

He remembers removing Scotch broom, Himalayan blackberry and old tires that littered the area. He tore down scrubby trees, salvaged firewood for tribal elders and prepared the soil for planting.

The Bluff Meadow is one of four that the Tulalip Tribes have created among the reservation's 8,000 acres of forest. The Bluff, Upper, Middle and Lower areas combine for about 12 acres of meadowland forage for wildlife.

Tulalip and other local tribes also are part of efforts by the state and a national elk hunters group to improve and maintain several forage meadows in the North Cascades foothills.

“It makes me feel good when I see it now,” Baker said of the Bluff Meadow. “It's beautiful here, and it's gonna work.”

What's working is a growing deer population attracted to the

meadows on the Tulalip reservation. Motion-activated cameras at each of the meadows record the numbers and mark the progress.

First there was a single deer. Then a group of bucks. Today, the camera in the Bluff Meadow is recording the return of young does and their babies, said Mike Sevigny, wildlife manager for the Tulalip Tribes.

“They eat day and night. We don't see skinny animals anymore. The females are healthier and they have healthier young,” Sevigny said.

And this means a healthier population for the tribes to hunt, he said.